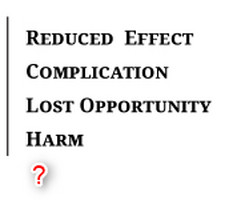 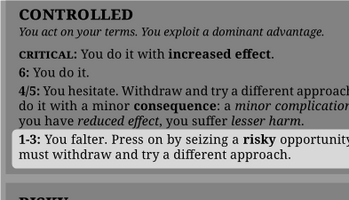 Following the latest release, there are only four types of consequence listed in the text, instead of five. This might worry some of my readers, but don't despair: the worse position consequence was "cut", but then again - not really. It's there, but it's not mentioned the same way. Instead, going to the next lowest position is only mentioned as an option out of a Controlled 1-3 (which you might decide to do to avoid failing altogether and losing the opportunity, for example).

My reasoning for cutting this is as follows:

So instead of calling out this thing that functions like a complication ON STEROIDS, Runners mostly relies on the GM rulings to impart the mechanical impact of a complication. without breaking those cardinal rules on page  based on what the player describes doing about it - as usual. There is no "you must try again at desperate" - it's just "this happened. Now what?" and any desperation comes from the opposition to (or foolishness of) their chosen course of action. Nothing says you must run headlong into danger. But it might be fun to try!

PS: I almost cut lost opportunity too, but honestly that one retains its usefulness - as a more serious form of complication to help differentiate the failed outcomes of Controlled actions from Risky / Desperate ones where the outcome will be decisive for the